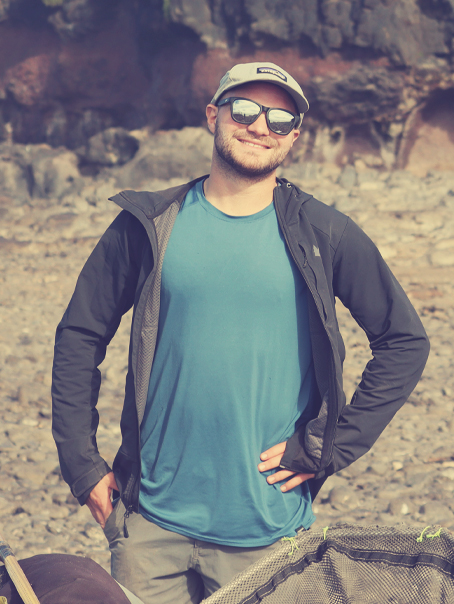 After completing a Bachelor’s of science degree in Biological Sciences from California Polytechnic San Luis Obispo, Adam left his home state of California and began to work on wildlife population monitoring and habitat use projects on a variety of taxa, from raptors in Belize, to sea turtles in Costa Rica, lemurs in Madagascar, and primates and sea turtles in Equatorial Guinea. During this time, he fell in love with marine and coastal ecology, and returned to the U.S. to complete a Master’s degree at Purdue University, Fort Wayne. His research focused on 1) the use of drones for the rapid assessment of mangrove on the Pacific coast of Costa Rica, utilizing machine learning and multispectral imagery to obtain biometrics and discriminate species, and 2) the use of automatic camera traps to assess vertebrate biodiversity in mangrove and tropical dry forests. Following his degree, Adam worked as the field manager for a marine research station at Parque Nacional Marino Las Baulas, Costa Rica, as a marine biology instructor for cetacean and sea turtle studies in the Mediterranean, and as a wildlife biologist for an environmental consulting firm in California, before beginning his PhD with Richard Reina at Monash University and Rebecca McIntosh at Phillips Island Natura Park in Melbourne, Australia.

Adam’s PhD aims to explore how plastic entanglement impacts marine predator populations by studying the effects of entanglement on the health and development Australian fur seals. As part of this, he also hopes to utilize a combination of multispectral and traditional imagery techniques to better quantify rates of entanglement in Australian fur seal populations. Adam also hopes to use historical and novel mapping data to answer questions on seal colony growth under future climate change and past over-exploitation scenarios.